Everyone in Kentucky seemed to be mad earlier last week.

Maybe its the change in the weather. Or could be our failing football program (we have basketball!!).
I’m on my ED rotation at UK and was working the overnight shift, when we had three patients come through with very similar injuries. One guy punched a car and one guy punched a light post. The last guy punched another person and when going for the second KO-wind back and use all my strength-roundhouse punch, missed his target and punched a brick wall. All three had symptoms of a boxer’s fracture, but only two got that as their final diagnosis.

Imaging with details from Radiopedia and UpToDate: 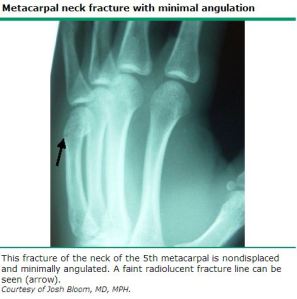 Depending on the severity and angulation of the fracture, some reduction may be needed.

And since i’m a total ultrasound groupie (I think some of my attendings are getting tired of me asking if I can ultrasound things for the heck of it), here’s a ultrasound showing a ulnar nerve block before reducing

After reduction, the goal of treatment is immobilization. Even though this is one of the most common hand fractures, there is no consensus for the optimal management for these fractures. Various means of immobilization include plaster cast, splint, brace or strapping of adjacent fingers.

A Cochrane review published in 2009 attempted to find which treatment modality “results in the best functional outcome in adults”. They did not find one method superior to the other reporting:

Five small studies, which included a total of 252 patients, met the inclusion criteria. Most studies were of poor quality and the patient numbers were small and none reported on hand function. There was no evidence that any of the treatments under test was significantly superior. Based upon current evidence, no single conservative method for fracture of the neck of the fifth metacarpal can be recommended as superior to another. Recovery though was generally excellent whichever method of treatment was used.

The third pt. that came with the double whammy of hitting a guy’s face and hitting the wall had a little bit more going on than a simple boxer’s fracture. He had a boxers fracture in the past and said this felt exactlty the same. He did have significant tenderness over the fifth metacarpal. He also did have two small scabs over his 2nd and 3rd knuckle. He presented to the ED 5 days after the time of injury due to worsening pain. Exam was pretty benign other than the worsening tenderness: No erythema, no fevers, no purulence around small lacerations that had scabbed over well, no warmth over any part of his hand. Imaging showed no skeletal injury.

Fight bite lacerations typically occur over MCP (commonly 3rd and 4th) joints of the dominant after a closed fist injury. Even though they tend be small, they are very prone to infection. Teeth can easily penetrate down the level of the bone since the extensor tendon is tightly stretched over the MCP joint.

Often times people ignore these injuries until the pain gets very severe or swelling and purulent discharge is present. Therefore, it should be assumed a established infection is present at the time of patient seeking medical attention
With the joint capsule being very close to the skin, risk of infection and secondary complications are increased. When the fist is relaxed, organisms are carried into deeper tendon space, leading to complications such as septic arthritis, osteomyelitis, or deep soft tissue infection.

An older article showing a study of 100 human hand bites demonstrated that 50 cases had septic arthritis, 22 cases of osteomyelitis, and 18 amputations. (source: Journal of Hand surgery 1991)

There are no comparative antibiotic trials for treatment of human bite infections. Agents lacking activity against Eikenella corrodens should be avoided; these include first-generation, penicillinase-resistant penicillins, macrolides, clindamycin and aminoglycosides. Clindamycin may be used for anaerobic coverage if it is administered in conjunction with an additional agent that is active against E. corrodens.

Because infected tendons, bones, and/or septic arthirits is difficult to treat on outpatient treatment alone, admitting patient should be considered. Outpatient therapy often times is not sufficient and unreliable. A small retrospective review of eight patients admitted for human hand bite infections showed outpatient management failed 6 out of the 8 patients. In addition to proper debridement and cleaning of wound site and starting of prophylactic antibitotic, ACP Pier Journal on human bites suggest considering admission with:

Miss anything? Forgot to include something important? Leave a comment and help us improve our knowledge base for medical students!